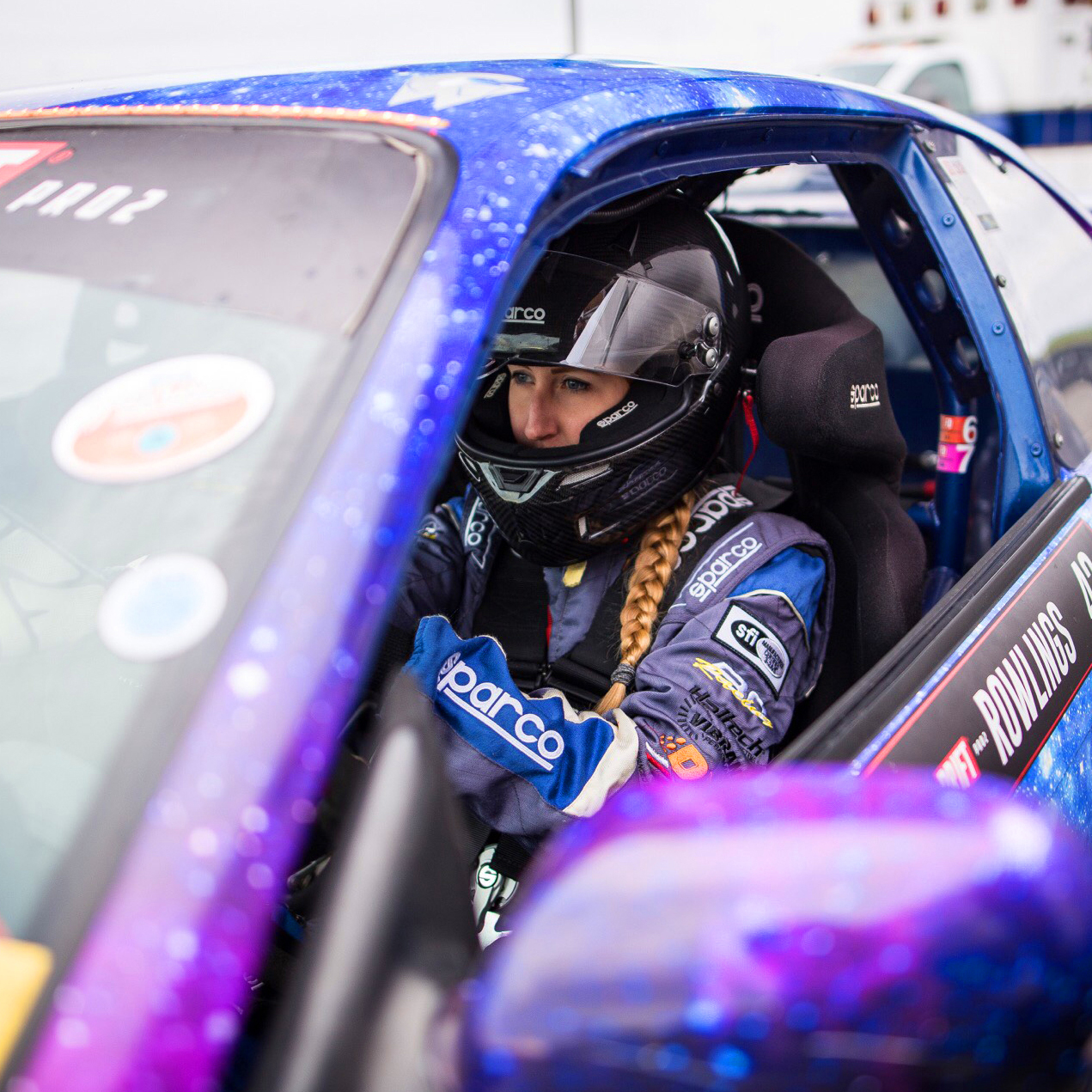 Last year, her nerves didn’t allow her to eat anything on race day and her empty stomach churned in fear as she approached the Road Atlanta start line in her S14. Formula Drift Pro 2 driver Kelsey Rowlings knew that she was starting to face a make-it-or-break-it scenario in her drifting career, as she had struggled so much in 2016 and now in the 2017 season she was plagued with car issues again. Kelsey was looking for a breakthrough. 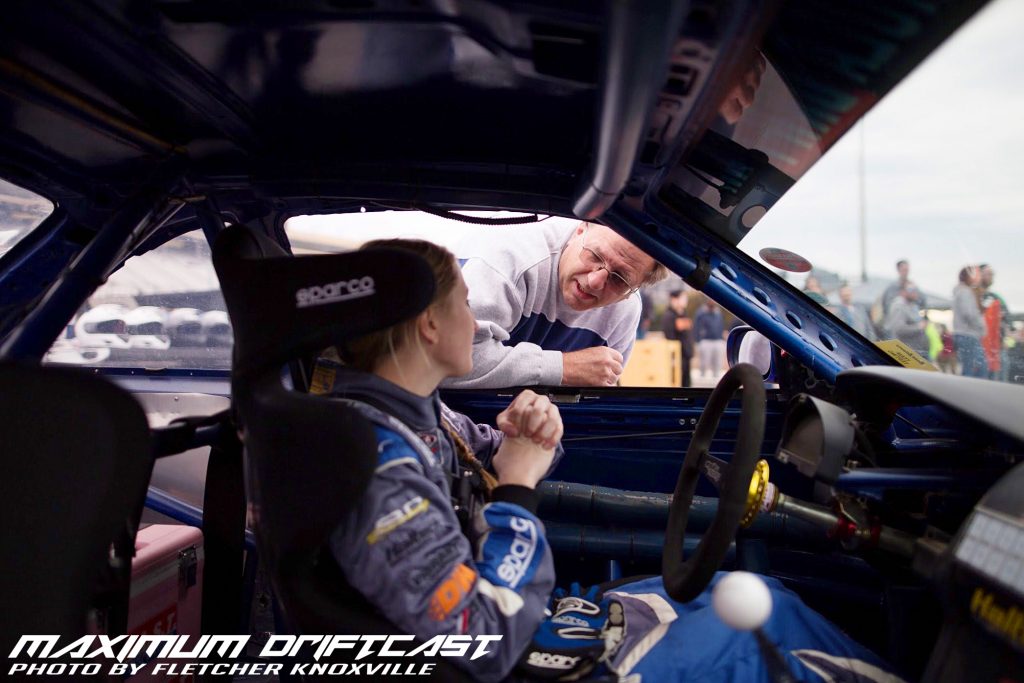 Kelsey recalls, “Every time I pulled up to the line, I was scared to drive the car because I never knew which direction it would throw me, and it caused me to wreck a couple of times.”
The prior setbacks were frustrating, but her resolve shined through as she replayed the memory in her mind. She took a breath and remembered, “Every single event, I would have the power steering cut out on me. I’d be fighting the car and I was never able to show my ability.”

Continuing to battle against her car during the 2017 Atlanta event, she recalled, “I wasn’t downshifting to go into the keyhole. I was staying in fourth gear the whole time so I could keep both hands on the wheel to try and steer the car when the power steering went out. I wasn’t strong enough to do it with one-hand and no power steering.” The struggle was relentless, but her dedication radiated through the adversity and she continued to fight on. 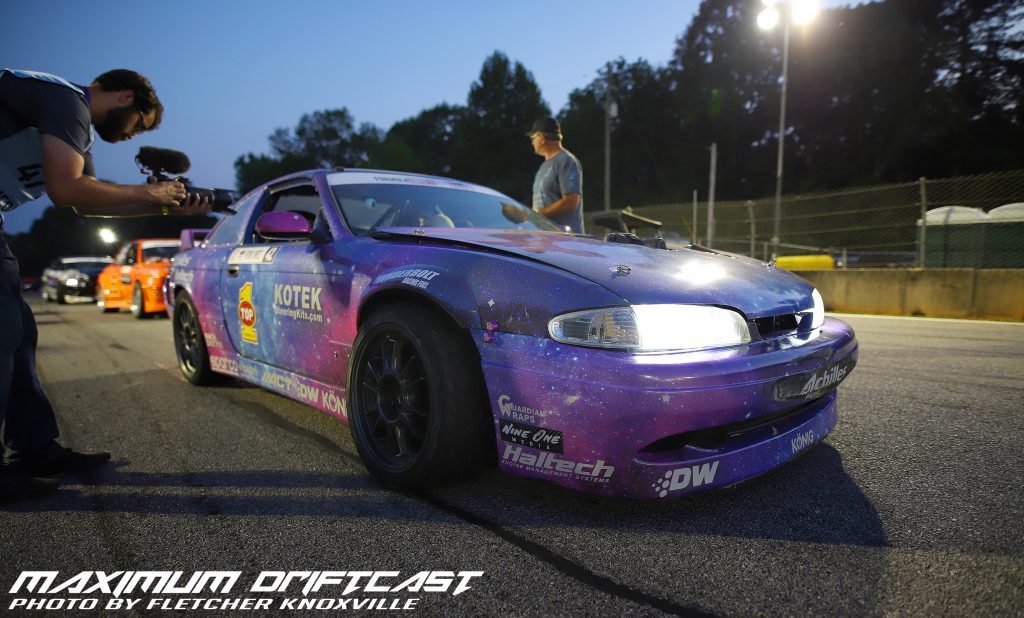 That fighting spirit has always been a part of the equation, as one of Kelsey’s first hurdles started with her dad, Dan, years ago. Dan was against the idea of her drifting as he thought it was too dangerous. So what does a young, headstrong daughter do? She rebelled and went to the track without him knowing for six months back in 2008. Eventually, she convinced him to come watch an event, and he did, but Dan had to leave for an engagement later in the day. After he had left, Kelsey ended up totaling her daily driver into the wall at Orlando Speed World and suffered airbags blowing up in her face and a bloody broken nose.

She took a break from drifting after that but didn’t sever ties as she eventually acquired an automatic 240. Dan said that if she excelled at school, they would swap it to a 5-speed using the parts from the car that was totaled at OSW. Summer break arrived and as she was returning home from attending her studies at University of Florida, she was rear-ended and the automatic car was totaled.
Kelsey laughs at the memory now because she said that she continued to pester Dan about building another car and said her dad came up with a solution by telling her, “Look, if you’re really going to compete in Drift, I’m going to make sure you’re safe.” Knowing that his daughter was never going to quit and that she was going to drift one way or the other, Dan got involved. Fall 2009 was when Kelsey finally got another car and started driving again. In 2015, she earned her Pro 2 license. 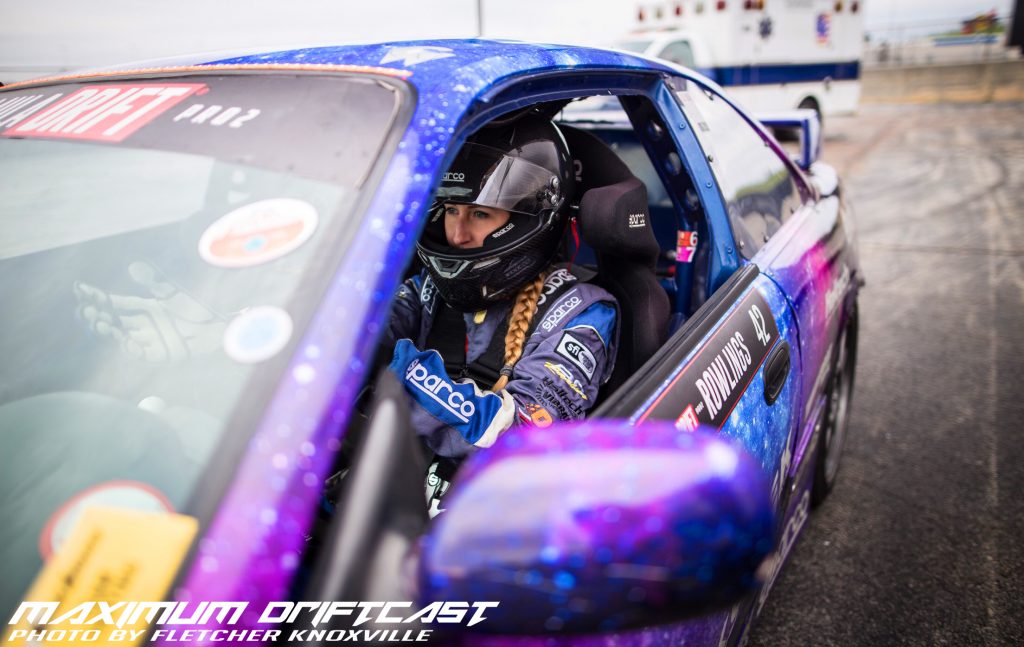 Today, you’ll see Dan standing next to her car at every round, beaming with that “proud-dad” look on his face, totally supporting his daughter on the track. Dan is exuberant and very thoughtful with his words as he describes his daughter with very strong opinions and a lot of perseverance. He believes it is due to her diagnosis with Sjögrens syndrome, which is an autoimmune disorder (your immune system mistakenly attacks your own body’s cells and tissues) and says, “In many cases, there have been times that she’s been unable to drift or [generally] do things because of the side effects of the disorder. She’s had to learn how to overcome and fight due to extreme fatigue, as she’s needed more sleep than the average person. She’s had to work to overcome a number of challenges to achieve any kind of success.”
Dan continues and praises her ability, bravery and willingness to go for it. 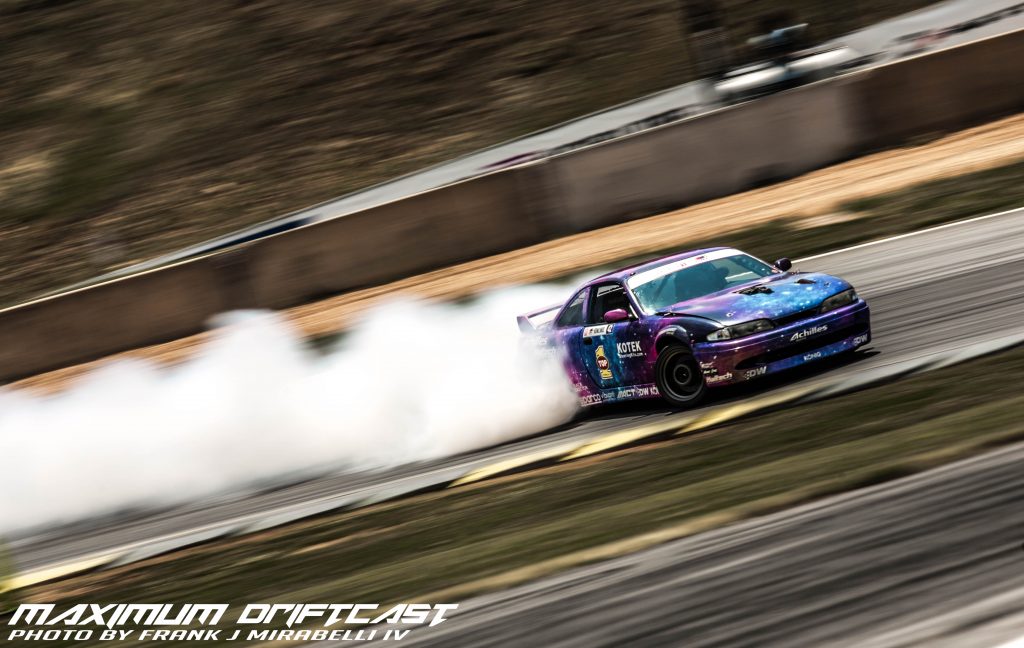 That tenacity has convinced Dan to engineer the entire car she’s driving. This year, they’ve added former Pro FD driver Pat Goodin as spotter and made some changes to the power steering that led Kelsey to find some much needed success in the first round of Pro 2 this year. In Atlanta, she qualified ninth and saw her first battle of the night against Australian, Josh Robinson in Top 16. She drove her heart out and showed what she could do with a working car. Advancing into the Great 8 battle against Travis Reeder was when her night came to an end as the judges awarded Reeder the win. Her seventh-place finish was considered a success, which the team will build upon.

It seems the team has fixed the power-steering issue, so Kelsey was able to do more with her S14. They are currently working on fine-tuning the steering, alignment and dialing more grip into the car for future rounds. This momentum is what she’s been working towards ever since her first visit to Road Atlanta ten years ago. This thoughtful, intelligent and wonderfully tenacious driver’s opinion on her results in Atlanta is that, “I do think that this was a breakthrough weekend for me and proved that I did deserve to be there.” 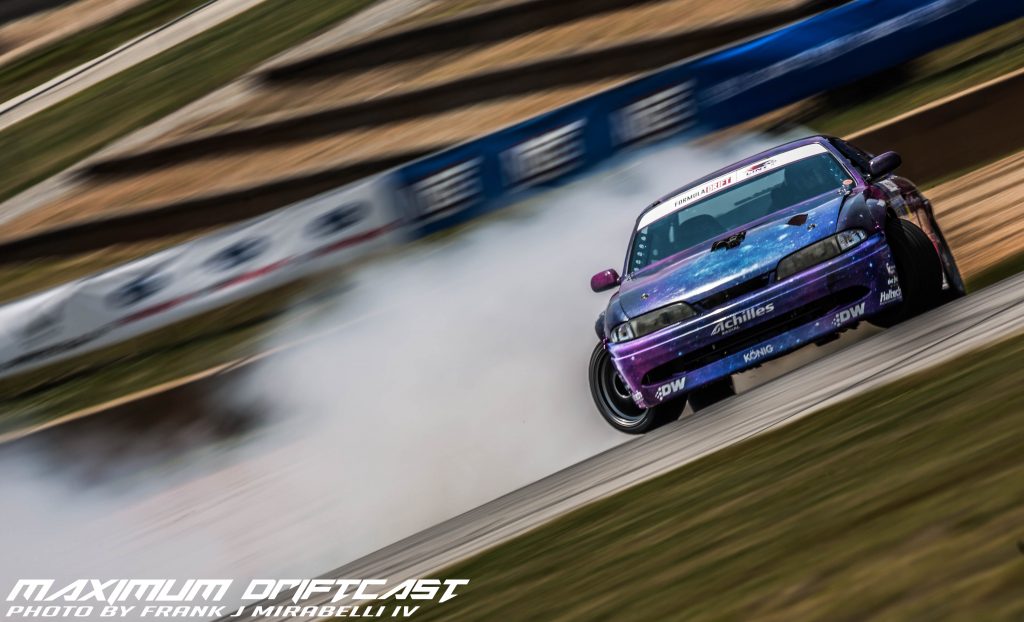 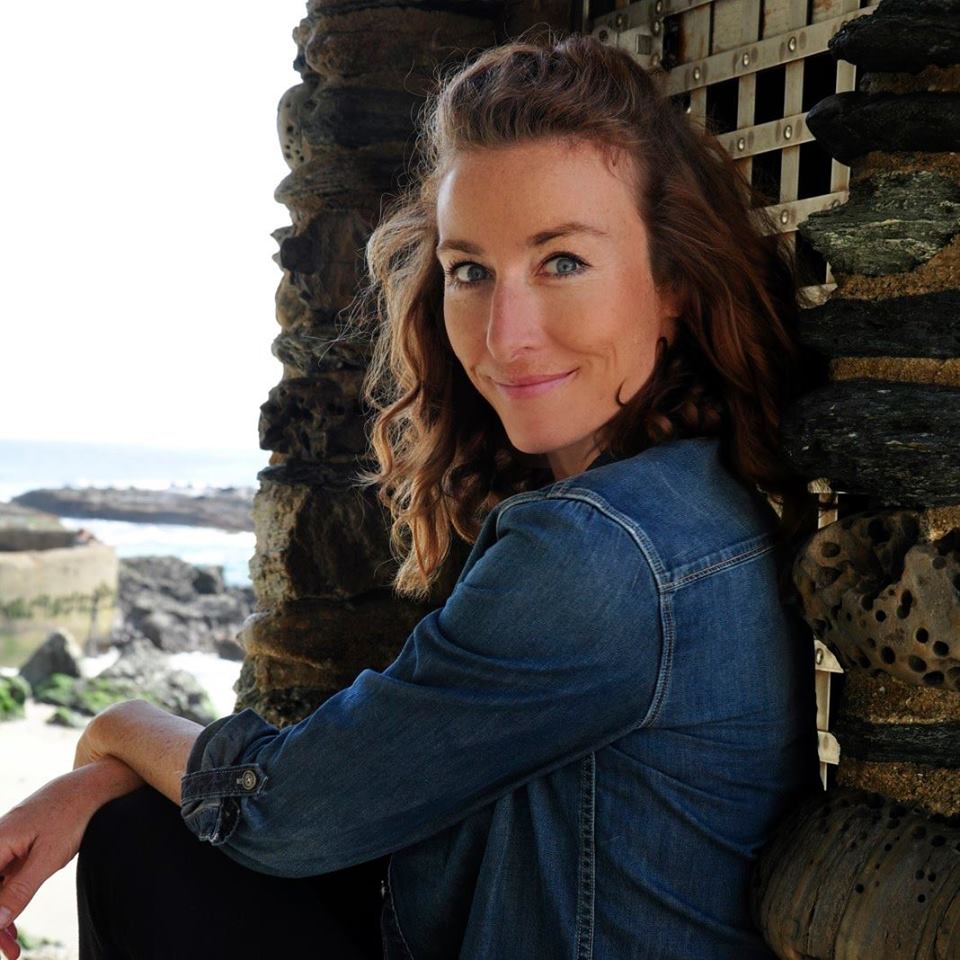 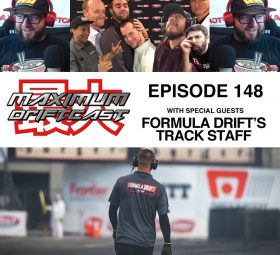 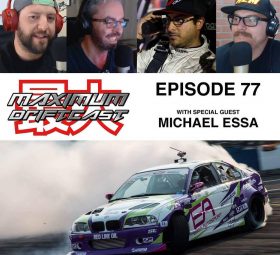 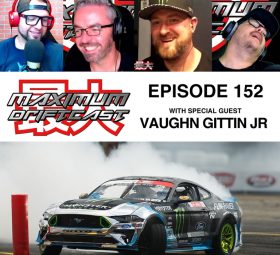 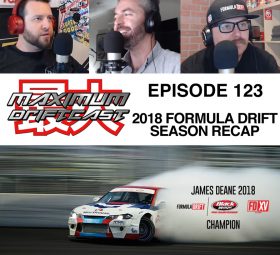 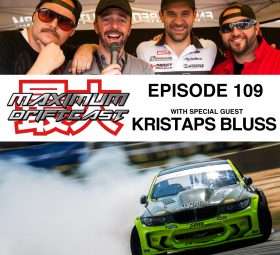 A Freak In The Sheets And Killer On The Streets with Kristaps BlussJune 26, 2018